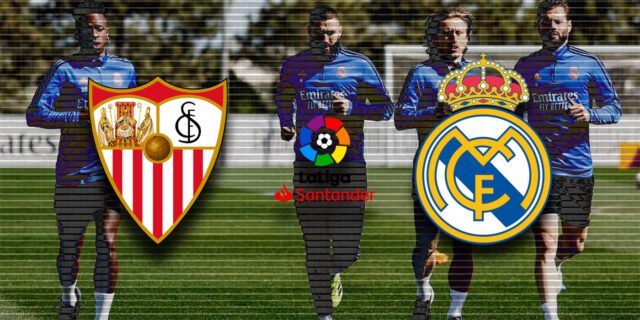 Following on from the qualification to the semis of the UEFA Champions League, Real Madrid returns to action in La Liga as they travel to meet Sevilla.

Winning a double this season is now a possibility and Madrid are highly in pole contention to achieve that. A good result against Sevilla takes them close to winning the league title.

The league leaders have accumulated 72 points out of the 31 games played whilst Sevilla have 62 points which places them third on the league log.

A win at home for Sevilla increases their chances of placing second at the end of the season. They are unbeaten in their last 9 home games and they have failed to win in their last 6 meetings with the Los Blancos,  losing 5 times and drawing one.

For Real Madrid, they have emphatically won in their last two away visits against Sevilla. In those two games, they have kept two clean sheets and could possibly be the only La Liga side to record three away consecutive wins without conceding.

The clash is expected to be played at the Ramon Sanchez-Pizjuan Stadium on Sunday, April 17, 2022, at exactly 7:00 pm.

News coming in is that Madrid will be without some key players. Karim Benzema, Ferland Mendy and Marcelo are major doubts for this game due to injury. Benzema sustained some cramps according to sources during the Chelsea clash. For Mendy, it has been reported that he has some muscular discomfort. Marcelo will be forced to be sidelined due to issues with his left adductor.

Carlos Casemiro is also expected to be out due to suspension.

Sevilla will be without Suso, Karim Rekik, Marcus Acuna, Thomas Delaney and Fernando Reges due to long-term injuries.

In the Spanish La Liga season 2021/22, Rafa Mir has played 17 matches (plus 11 as a sub). He have 20 shots on target from a total of 44 shots and have scored 9 goals (8.18 xG). Rafa Mir averages 10 passes per match with a pass completion rate of 66% and has no assists. Rafa Mir and Vini Junior will be the players to watch out for in this encounter. Vinicius Junior has been very impressive and has earned him a place in the Ballon d’Or power ranking. His performance in the season has earned him the 8th position among the top 20 players in the Ballon d’Or rankings. In La Liga, he has scored 14 goals with 5 assists, forming an indomitable partnership with Karim Benzema. He’s certainly key for the Los Blancos in this fixture.