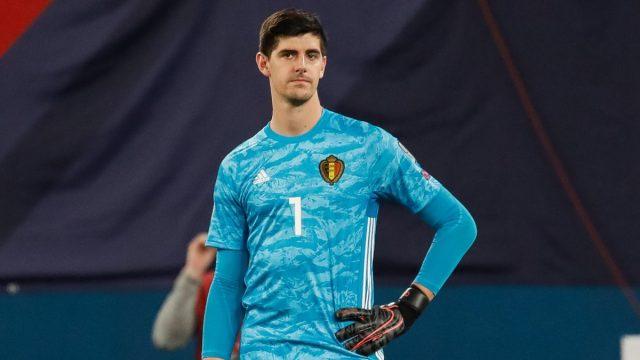 Real Madrid have a bit of another injury concern after goalkeeper Thibaut Courtois dropped out of the Belgium squad with an injury.

The shot-stopper has been forced to forfeit the remainder of the games during the international break and return to the Spanish capital with Diario AS reporting that he carries a minor injury in his psoas muscle.

The publication also adds that the Madrid No.1 should recover in time for the club’s next league game against Cadiz next weekend as the injury is not that serious.

“Thibaut Courtois will be leaving the squad after a medical examination,” read a post by the Belgian Football Federation on Twitter. “He is not in a condition to play.”

UPDATE: @thibautcourtois will be leaving the camp after his medical check-up. He is not fit to play.

Rather continue with the Belgium team and continue his rehabilitation, Courtois will now travel back to the club where he will be taken care of as he continues recover from the injury.

He will miss the Red Devils’ friendly against Ivory Coast on Thursday and also the UEFA Nations League games against England and Iceland respectively.

Zinedine Zidane will be hoping that the goalkeeper is able to recover before the game against Cadiz on October 18.

Should that not turn out to be the case, Diego Altube looks the likeliest to stay in goal for the game against the promoted side following Andriy Lunin’s positive test for coronavirus this week.

However, the medical staff at the Santiago Bernabeu are confident Courtois will be 100% fit before the Cadiz clash as his return back to Spain is a precautionary rather than a major injury.