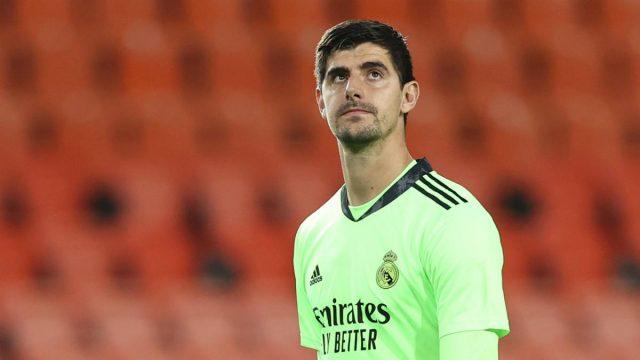 Thibaut Courtois was left furious following his side’s 4-1 loss to Valencia on Sunday evening in the Mestalla.

Los Blancos fell to a humbling defeat to Javi Gracia’s men after taking the lead just 23 minutes into the game, but the host drew inspiration from the game after Carlos Soler equalized from the spot.

The Madrid goalkeeper spoke to the media after the game on a number of things from the game, including the fact that his side didn’t give away any open play chances aside the penalties conceded.

“We started the match well, we went 1-0 up, we didn’t keep pressing high and then went behind,” Courtois said. “There were three penalties against us. They didn’t create many chances, the first one was a penalty because of a Lucas handball, I saved it, they took it again and I came close to saving it again. And the second goal was a bit of bad luck. After the break we were looking to turn things around because I think we could have done it today.”

The Belgium international also talked about their schedule when they return from the international break, adding: “When we come back we have difficult matches: Villarreal, who are very strong, and Inter, where we are playing for the Champions League. So we can’t let this match affect us too much, we have to be mentally strong, know what we’ve done wrong and keep improving.”

On his own performance, the 28-year-old said: “Just at the start of the second half I made a good save that hit the post and then two more penalties. We had a lot of chances to score, but today it didn’t want to go in. Before the second goal I heard that Asensio was fouled, but the decisions was made and we can’t change anything.”

Courtois was also asked if the absence of Casemiro affected their game: “The philosophy of the coach is that there are 25 of us and all 25 can play because the season is long. We started the game well and in the second half it was difficult for us to respond. Some players weren’t here today, but those who played did well. We lost and that’ s not good, but now we’re going away with the national teams and it’s time to put this match behind us.”