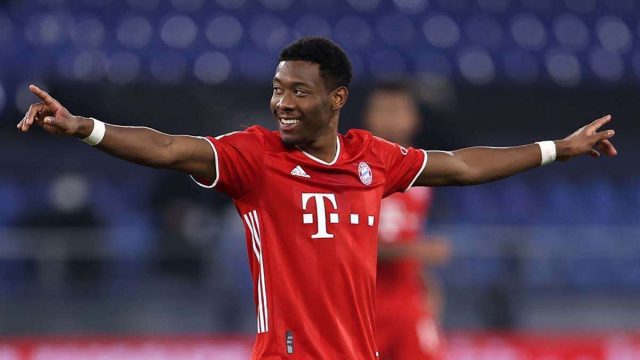 Bayern Munich defender David Alaba is capable of donning the famous white jersey owing to his quality, said Real Madrid midfielder Toni Kroos while speaking with Sky Germany amidst all the transfer talks over Alaba probably arriving at Santiago Bernabeu in the summer.

The Austria international is expected to bring an end to his stay in Germany at the conclusion of the current campaign after failing to come to common terms with Bayern over renewal of his contract which runs out in the summer. He has been linked with a number of teams already including the likes of Chelsea, Liverpool, Barcelona and Real Madrid but it is the latter who are said to be leading the race for his signature.

After announcing that he will be leaving the Bavaria club in the summer, Kroos has no doubt his former teammate has the quality to become a Madrid player should he decide to move to the Spanish capital.

“Here you need quality, that you are physically there, that your head can handle many situations,” Kroos told Sky Germany.
“You need more than just sporting quality. I haven’t played with him for almost seven years. So it’s a little difficult for me to say how and what he thinks.

“I’ve already read the name Alaba in connection with Real Madrid, but I don’t have any information on it now.

“If you’re a regular at Bayern, then you definitely have the athletic quality to play at Real Madrid. That’s clear, but we’ll see what will come of it in the end.”

With the future of club captain Sergio Ramos far from being settled, a move for Alaba could be vital for Zinedine Zidane’s men for the upcoming season should Ramos decide to quit.