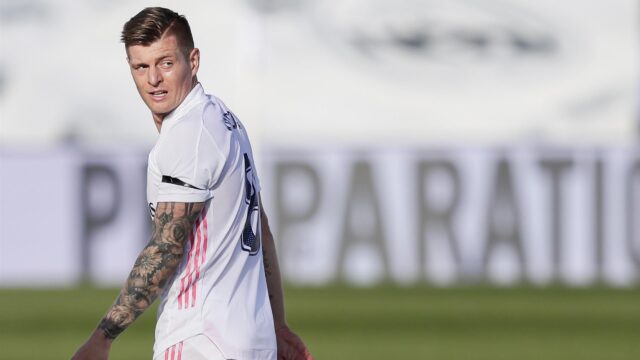 Real Madrid and Germany midfielder Toni Kroos in the latest episode of Einfach mal Luppen, has revealed that his side getting eliminated from the UEFA Champions League by Chelsea was a right call.

He also took time to discuss the performance of the referee in charge of Madrid’s game against Sevilla including a host of other issues.

Madrid lost 3-1 on aggregate to Thomas Tuchel’s side having played out a 1-1 draw earlier in Spain. Speaking on the team’s elimination, the midfielder said: “We deserved to be eliminated against Chelsea. Especially in the second half of the second game it wasn’t difficult to see that the better team had won.“

On his assessment of referee Juan Martinez Munuera, the German said: “I’m not someone who likes to grumble in any way. But in that case I was extremely annoyed. ’Zizou’ never really says anything about decisions, he always protects the referees. The fact that he goes to the referee after the game is a sign that he too felt a bit ripped off. And me too. We made that very clear to him again. He tried to justify himself, but for me it is a very, very clear wrong decision.”

Adding to the penalty awarded against Eder Militao, the 31-year-old added: “My opinion is very clear and it is very rare that I disagree with the referee at all. That was such a day. If you have the feeling that you are being disadvantaged in such a way and that with such a meaning … that’s one thing where I say: It doesn’t work. He has his back to the ball and doesn’t even see it.

“And in slow motion you can see that the ball first goes to your shoulder and then to your arm. We were also told that if the ball ricochets off another part of the body, this is not a handball. To look at it again and to revise it, because he didn’t whistle in the game itself, is a real intervention in such a championship. If in the end it is not enough, in my opinion that was a situation that also contributed to it. For me this is clearly a situation who co-decided that. This is not only bitter, it also makes you very angry”

Kroos is also set to miss out on Madrid’s last game of the season against Villarreal after testing positive for coronavirus.