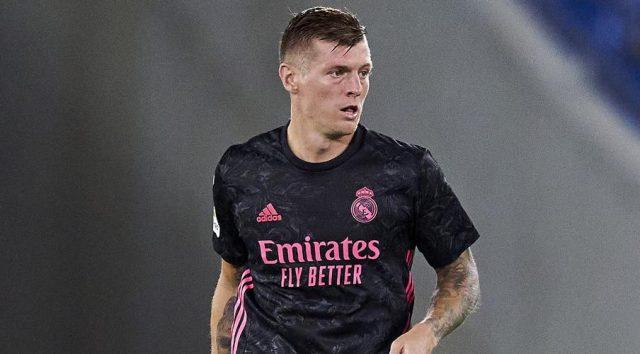 Real Madrid will play host to Real Valladolid in their third league game of the 2020/21 La Liga campaign on Wednesday at the Alfredo di Stefano Stadium.

The club have a number of injury concerns ahead of the encounter and some of the notable names include Eden Hazard, Marco Asensio, Eder Militao, Mariano Dian and Toni Kroos.

However, Kroos looks to be our focus in this piece considering how crucial he has become for the club in the last two seasons.

Kroos came off before the half time whistle during the last game against Real Betis with many outlets reporting that the midfielder asked to be substituted due to a hip problem in the course of the game.

The German is said to be a doubt for the game on Wednesday and although he has joined in group training in the last two days, the club are expected to carry tests on him to determine the seriousness of the injury.

He has been crucial for Zinedine Zidane’s side and it is no wonder his absence in the second half of the game against Manuel Pellegrini’s side was massively felt.

During his 45 minutes on the pitch, Kroos touched the ball 48 times with an a pass accuracy of 87.7% from 36 passes completed.

He also provided two key passes in the first half while completing four out of his five long balls attempted against the Seville-based club.

It will be curious to know how the tests carried on the German will come out but he is likely to start from the bench should the results of the tests come out positive.

His place is also likely to be taken up by Luka Modric for the encounter just as was the case when he came off at the end of the first 45 minutes in the win over Betis.

Whatever may be the case, we wish the ‘Sniper’ a speedy recovery. Animo Toni.