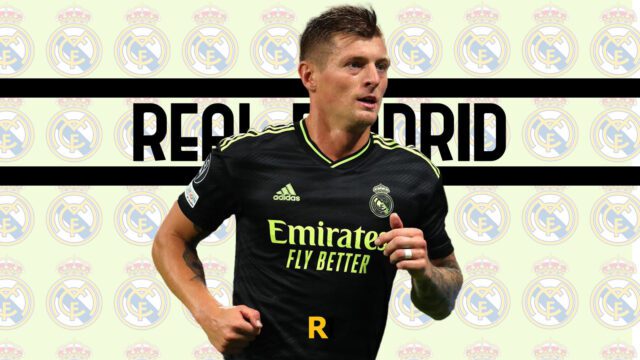 Real Madrid midfielder Toni Kroos has been rumoured with links away from the club as the player is in the final year of his contract with the Spanish giants.

Per Daily Mail’s report, English top-flight club Manchester City are key admirers of the mercurial midfielder and are willing to pay £230,000 a week should Kroos decides to join them.

Adapting to Manchester City will not really be a big problem as the player has worked under Pep Guardiola before at Bayern Munich.

Is it just a mere rumour or actually one of the genii moves Real Madrid club president, Florentino Perez, is using to cash in on another ageing player? – A question many football fanatics around the globe are asking.

It wouldn’t be a surprise if the Los Blancos decides to cash in on the player. A real case is Carlos Casemiro’s departure from Madrid to Manchester United. It started as a rumour and just a few days later, the player committed his services to the Red Devils.

Luckily enough the club had made provisions and replaced him already with Frenchman Aurelien Tchouameni who had already settled in the midfield of the Los Blancos so Casemiro’s departure didn’t have an influence on the club’s performance.

Another shocking case was Cristiano. Ronaldo’s move to Juventus. It also started as a rumour and finally, Madrid decided to cash in on another ageing player who is one of the best players we have seen in world football.

Will that be the same case for Kroos? It is understood that the German midfielder is a fantastic player but his departure could possibly hand more gaming time for youngsters like Eduardo Camavinga and Dani Ceballos.

Also, Federico Valverde could be handed that spot in the midfield if Kroos leaves. These three are likely replacements in the club.

Dortmund’s Jude Bellingham could also be another option to replace ageing Kroos at Madrid if the club decides to go all out for him and secure his signature.

For now, nothing is ruled out at Real Madrid’s end but with Kroos contract coming to an end sooner than later, Madrid cashing in on him may possibly be an option considering many clubs would be interested.