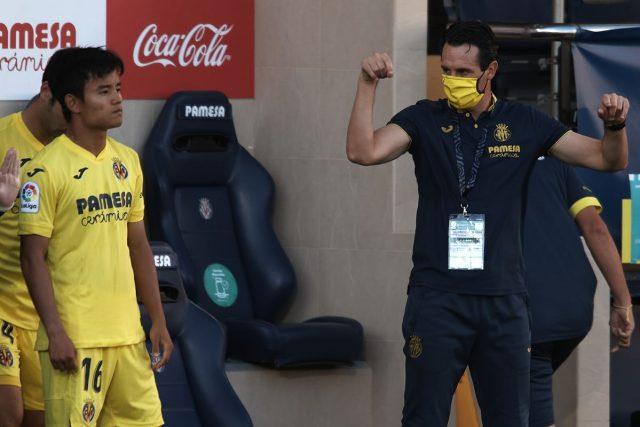 Villarreal manager Unai Emery has warned that it will be best for both Takefusa Kubo and Real Madrid if the player’s development process is not accelerated.

There have been reports that Los Blancos are not happy the treatment of the 19-year-old who joined Villarreal on loan for the 2020/21 campaign.

Having had a breakout season with Real Mallorca last term, the expectation was that the Japan international would have gotten the needed game time with the Yellow Submarines after turning down several clubs.

However, that has not been the case after the first few weeks into the season, which has left Zinedine Zidane and Madrid fans around the globe unhappy.

In an interview with AS, the Villarreal manager was asked about the situation of the youngster and the increasing circulation about his treatment.

“Kubo is a great kid, he’s a boy who wants to grow up and who really wants to do well,” Emery told AS. “He is aware that he has a challenge, that of being the first Japanese player to reach the highest level, and there are many people who want that to be so and who want to speed up the processes. But that acceleration is not good, he must adapt and he must grow to compete in all positions.”

While admitting that Kubo’s versatility gives him options, he has also asked the player to improve on the left wing and in central spots, with the right wing posing strong competition.

“He can play in three positions, in the position of the seven (RW), which is his best position, but there he has high competition. In the center he works to improve and on the left he must grow more, so we are in that process,” he added.

“I understand the media noise, he is a star off the field, but he must be a star inside the field as well. Our obligation is that you do it in the best possible way and take care of him, so that he can achieve that goal. I have not told any player that he is guaranteed to play, nor that we will be Champions with him, it is something that he would not do. To achieve a goal is something for everyone, for the whole team, not for a single player no matter how good he is,” Emery concluded.