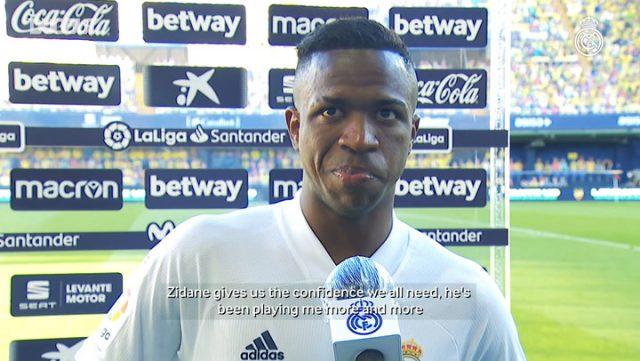 Real Madrid winger Vinicius Junior has admitted he could have grabbed more goals during Sunday’s win over Levante in the Spanish top-flight.

The 20-year-old broke the deadlock for Los Blancos in the game after 15 minutes but went on to miss a couple of sitters before being taken off.

In a game where the away side created most of the chances, the Brazilian was presented with so many opportunities but was let down by his  poor finishing.

However, he believes he had the every opportunity to add to his tally but will need to work hard to make the numbers.

“[I’m] happy with the goal and the team’s game,” he told Movistar Plus after the game. “It is normal to suffer a little away from home and more so at the beginning of the season. [I’m] happy for the victory and now [we can] rest a bit.

“[I’m] glad that I scored. I was in the right place and I couldn’t miss, although I had more chances later.

“I’ll keep working to help Real Madrid a lot more. I could have scored more, but I’m happy with the victory.”

Paco Lopez’s team looked like a side that really wanted something from the game after their much improved performance during the majority of the second half.

“At the beginning of the season, it is normal to cost us in the second half,” he said. “It is hot here and Levante are good team. They know how to play football well.”

With the international break scheduled for this week, Madrid’s next league game will be in two weeks time and the forward added that he side will be much better after the break.

“We lack a bit of rhythm, but I think that after the national team break we will come back much better,” he noted.