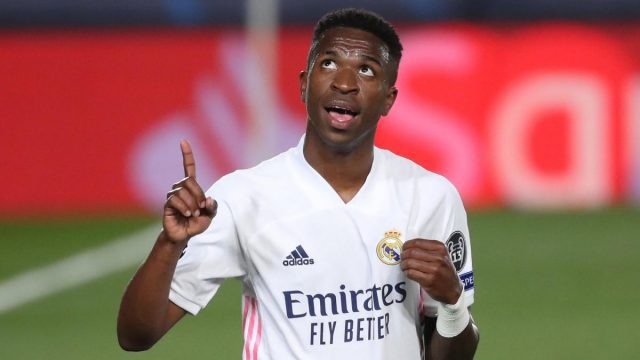 Vinicius Junior came up with arguably one of his best performances in a Real Madrid shirt on Tuesday against Liverpool in the first leg of their UEFA Champions League quarter-final game.

The Brazil international scored twice and played 85 minutes of action as Zinedine Zidane’s side beat Liverpool 3-1 at the Alfredo Di Stefano Stadium.

That performance was worth the wait as many of his critics were left hanging considering his past experiences.

Speaking to Movistar+ after the game, the 20-year-old talked about his feeling after such a convincing game and explained what it means to him.

“Outsiders talk, I keep working and that gives me the strength I need to get to the crucial games and score the goals we need. It’s great to win in the best moment of the season,” said Vinicius when asked about the criticism he gets because of his finishing.

As part of his celebration for putting his team ahead in the game, the Brazilian kissed the Madrid badge on the shirt. “I work a lot, I dreamed of playing for Real Madrid and I always want to give my very best for our fans, the club and my family,” he added.

The attacker also paid tribute to Toni Kroos, whose pass played him through on goal for the opener.

“He’s got unbelievable class, nobody can play the way he does, I thank him for that great pass,” Vinicius added.

Zidane allowed the player to have a bit of a fan even when it was clear he had given all he had and the player confirmed that.

“I was tired, 10/10 on a scale. I think it’s good to leave the game exhausted, I gave it all for this jersey,” concluded Vinicius.