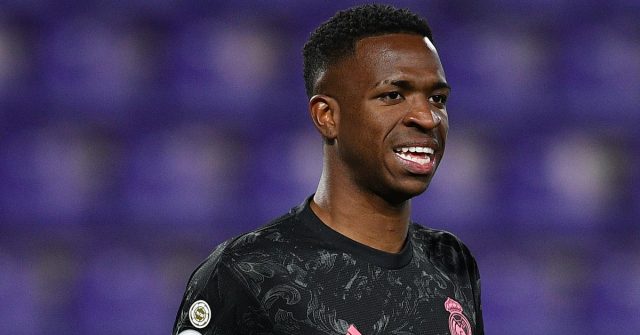 Real Madrid youngster Vinicius Junior has reiterated his desire to stay at the club for a long time while also dismissing suggestions of a loan move away from the side.

Since making his big-money move to the Santiago Bernabeu two and half years ago, Madrid fans are still hoping to see the best of the Brazil international.

He has struggled to nail down a permanent spot in the starting lineup at the club due to the presence of Eden Hazard and his lack of consistency.

Despite his mishaps, the left-winger is still bent on achieving success at the club, stressing that the expectation in his early career at the Spanish capital are too much.

Asked if he would be open to leaving Madrid on loan in the near future, Vinicius told TNT Sports: “No. I’m always focused on wanting to be at Real Madrid, being with the best players, learning alongside the best players.

“I’m 20 years old and it seems as though I’ve been playing for many years but I’m only at the beginning of my career.

“I’m learning a lot from the players that are here, those that play in my position. I want to stay at Real Madrid forever.”

In the absence of Hazard due to injury, Vinicius has featured regularly for the club in the last four games and will likely be involved once again when his team faces Atalanta in the UEFA Champions League on Wednesday.

The Brazilian is two appearances away from grabbing his 100th involvement as a Madrid player across all competitions. He has 31 goals involvements during that time, scoring 11 and providing 20 assists.