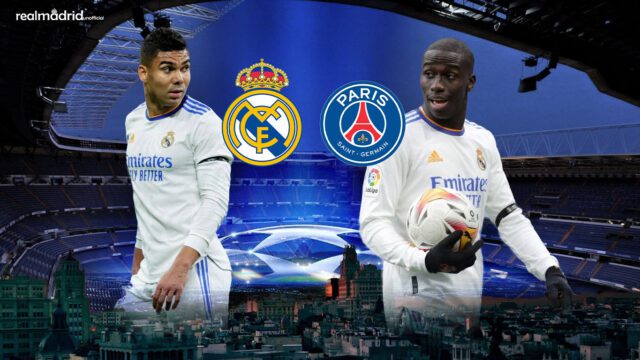 Real Madrid comes up against Paris Saint-German in the second league of the UEFA Champions League Round 16 tie on 9th March 2022.

In the reverse fixture, Real Madrid suffered a 1-0 defeat at the Parc des Princes and would need to bring their A game to edge past the Parisian club.

Questions were raised about the approach and kind of system Carlo Ancelotti used in the first leg. Many believe it was a pragmatic and unfruitful system and would need to change his tactics in the second leg.

There are many concerns with regards to this game for the Los Blancos as two of their key players wouldn’t be able to feature in this showpiece due to match Suspension. Notable names are Casemiro and Ferland Mendy.

Casemiro has been one of the core figures in the Real Madrid set up and his absence would be heavily felt in the team as he is the man who protects the back four of Real Madrid. He has played all 7 matches for Real Madrid in the competition so far. Despite being one of the players who break opponents’ play and recover balls, he has managed to record 90.5% passing accuracy and has completed 344 passes out of 378.

Another player whose loss would be a major blow is left-back Ferland Mendy. The Frenchman has established himself over the past season as the first choice left-back whenever his fit to play. Out of 7 matches the Los Blancos have played in the competition this season, Mendy has featured in 5 of them. He has a total of 18 balls recovery (i.e 3.6 average per match) and has made only two tackles. Mendy has completed 214 passes out of 230, recording 22.6% passing accuracy.

Now the question many are asking is, would Madrid be able to edge past PSG without Ferland Mendy and Casemiro?

The answer is Yes, Real Madrid over the years have been favourites to win the European Club competition, winning 13 times. They are the most decorated club in the competition. They do have a slim chance of qualification even without these two players.

We take a look at how they will possibly set up in the absence of the duo.

For Casemiro’s position, young, experienced midfielder Federico Valverde is expected to be the likely option to replace him. It will be a like for like replacement. One thing you cannot take away from Valverde is being a versatile player, who can play all the roles in the midfield. He can sometimes be used as a winger in either a 4-4-2 system or a 4-3-3 system. Valverde hasn’t been very influential for Carlo Ancelotti, finding it difficult to break into the first eleven but this opportunity would help him prove his critics wrong.

Also, Madrid can depend on young French lad Eduardo Camavinga who has already featured in 4 of the 7 matches the club has played in the competition. Camavinga has provided one assist. He has completed 92 out of 104 passes and can boast an 87 per cent passing accuracy. The mercurial midfield is expected to step in the shoes of Casemiro.

The absence of Ferland Mendy will pave will for rotations to be done across the backline.

Nacho Fernandez could be introduced to partner Eder Militao at the centre back spot in order to push David Alaba to occupy the left-back position.

Nacho is also a versatile player who is adapted to play across the backline and could be used as a left-back.

Carlo Ancelotti could also count on veteran left-back Marcelo de Silva Junior to fill the left-back spot or he can switch to a three-back system to keep Marcelo as the left-winger.

Though Ferland Mendy and Casemiro may be influential for the Los Blancos in Ancelotti’s set-up, the squad depth and plan Bs should be a motivation for the Spanish side and a weakness for the French outfit.