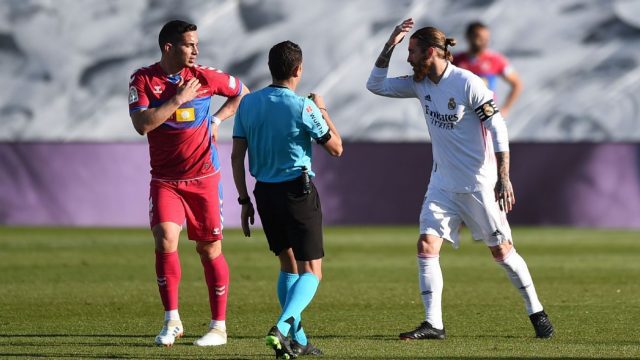 Real Madrid manager Zinedine Zidane has insisted his side were unlucky not to have been given a penalty for a challenge on Sergio Ramos by Ivan Marcone.

The incident which received little attention saw the Madrid captain go down in the Elche penalty box after being tugged by the midfielder, with the former being adjudged as the culprit.

Speaking on the particular incident Zidane told the media: “I’m not going to get involved. The referee did his job, that’s it.”

“We thought there was something in the incident, the referee didn’t, so that’s it. Nothing more.”

Real Madrid beat Elche by two goals to one thanks to a late double from Karim Benzema after the side had conceded on the hour mark.

Ramos was returning to the lineup for the very first time since the Spanish Super Cup loss to Athletic Bilbao.

The Spain international was part of a three-man defence set up by the gaffer in a new system he used for the majority of the game.

“It was an option that we’d already used to get further forward with the wing-backs,” Zidane said on the change of system. “Elche are a team that defends very well. They work really hard. When your opponent drops deep, any team can struggle. It’s up to us to find solutions.

“We had chances at the end of the first half. When we get into our stride and we keep patient, things come. We have to believe more, but without going crazy.

“In the end, we won. The outlook is always a positive one. We had chances. The system doesn’t change much.”