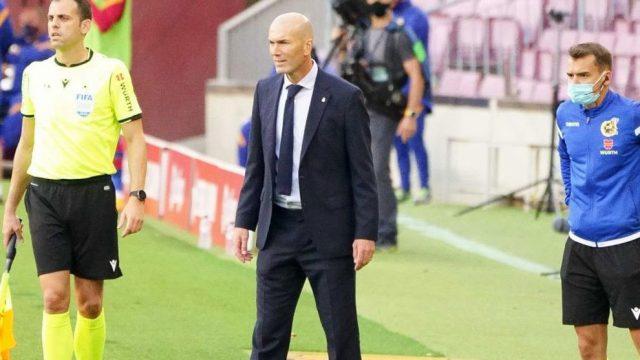 Zinedine Zidane has claimed that he is ‘happy’ with the performance of his team on Saturday amidst the comments which followed their consecutive losses last week.

The game over the weekend saw Real Madrid beat Barcelona by three goals to one at the Nou Camp with Federico Valverde, Sergio Ramos and Luka Modric all scoring for Zidane’s side while Ansu Fati claimed a consolation goal for the hosts.

And speaking to the press after his side’s convincing win over their fierce rivals, the Frenchman revealed his critics have been put to bed following his team’s performance.

He said: “We had a good game. I’m happy for the players, after all that was said about my players in the last few days. The team was very united. We can enjoy what we did today. I don’t know if what was said in the past few days was fair, but what I can say is that I’m very proud of my team. It may only be three points, but we must enjoy this considering all the comments that were made about the squad in the past few days.”

Zidane was asked if this performance came about as a direct response to the critics. He replied: “It’s not about proving people wrong, it’s about working hard and believing in what we’re doing and being together. That’s what we did. We were strong in defence and midfield when defending. It’s all about having a good game and that’s what we did. “

Ramos’ penalty call was the most controversial point of the game and the gaffer was also quizzed on his take of the foul.

He added: “There’s a referee, he went to review the piece of play and decided it was a penalty. I don’t like to speak about refereeing, because it’s difficult work, and I’m not going to start today. Regardless of that incident, I think we deserved to win. We won 3-1 and could have won by more, although it’s true that Barcelona had chances too.”

Zidane was also asked about Ramos in general and about how important his return was. He said: “We know what he is like as player, but also what he is for the whole team. We always want him to be in the team. It’s important to have the team playing like they did together, with togetherness. The good things about today are that we secured three points and that Sergio didn’t feel any pain.”