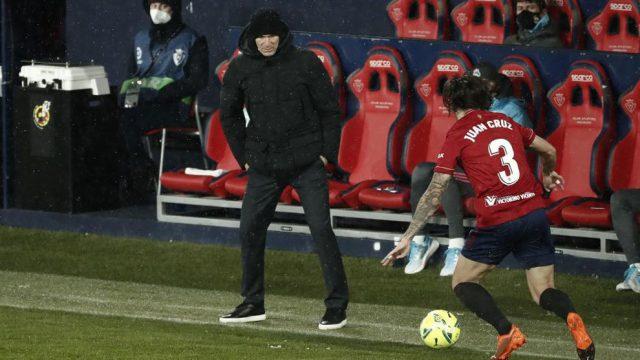 Zinedine Zidane was one of the very first people to vent their frustration at the Spanish FA following Real Madrid’s goalless draw with Osasuna on Saturday night.

The Madrid manager felt it was not right to play the game considering the condition of the city and the pitch which hosted the game.

He said: “It was bad, bad, bad. We did what we could on the pitch. This wasn’t a football game. The conditions were what they were, and that’s that. I’m telling you our feeling after these two days. Who knows when we’ll return? But, that’s football. Well, no, that wasn’t a football match today. But, we have to forget about this and think about our game on Wednesday.”

He made it clear that he felt the game should have been postponed for further date having been experiencing a bad weather at the city of Pamplona. “Of course, yes,” he replied at that suggestion and that was his entire answer.

Zidane went on to say that his team were forced to play in a difficult condition and they had no option other than that. He added: “We played the match because they told us to play the match, but in these conditions we saw what we saw. It wasn’t a game of football. I’m saying what I think. The rest is in the past. But, we don’t know what’s happening now, if we’re travelling back now or on Monday. It’s not excuses, but everyone wants to see a game of football. Today, the conditions weren’t right for this. This is what we’re all feeling.”

Finally the former Madrid midfielder apportioned the blame on the pitch when asked to choose between the pitch and the our-hour wait in the plane the night before the game for his side’s bad performance against Jagoba Arrasate’s men. “You already know, it was the pitch,” Zidane replied.