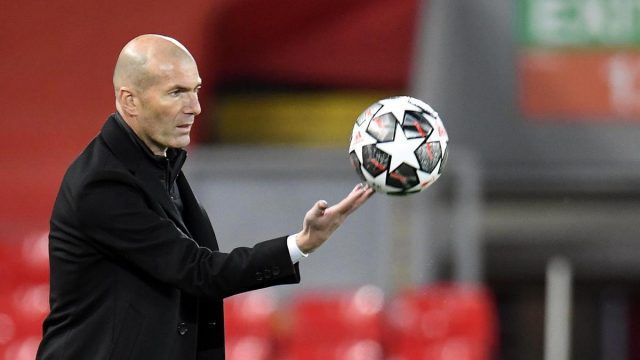 Real Madrid manager Zinedine Zidane has branded reports of the club being disqualified from the UEFA Champions League this season as well as being banned from next season’s edition, as ‘illogical and absurd’.

The club have been in the limelight for quite some time now following the intentions of Florentino Perez to spearhead some big clubs on the continent to set up an European Super League.

Per the Madrid president’s explanation, the clubs they were looking to involve would forfeit the UEFA Champions League to partake in the Super League.

However, that idea was not welcomed by the many people who are keenly interested in the sport, with the UEFA president as well as other football governing bodies condemning the thoughts of the establishment of the Super League.

UEFA were thought to be considering punishment for the clubs that are still keen on carrying plans of the new competition with Madrid’s name being mentioned.

There were also reports that the club could potentially suffer expulsion from the 2020/21 Champions League as well as being subjected to bad officiating.

But Zidane says that would be an unreasonable decision on the part of the association, adding that his side have earned the right to play in the competition.

The gaffer said: “We have the right to play in the Champions League. It’s illogical and absurd [that we might be disqualified]. No, I don’t have any worries [about the refereeing]. We’ll play our semi-final, as is our right.”

Real Madrid plays Premier League side, Chelsea, in the UEFA Champions League semi-final, who were one of the six English sides to have also opted out of the Super League plans, on Tuesday at the Alfredo Di Stefano Stadium.