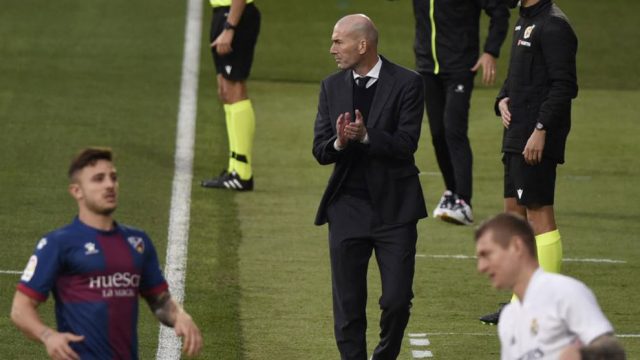 Zinedine Zidane returned to the touchline for Real Madrid on Saturday in the win over SD Huesca having recovered from coronavirus.

The manager had previously missed his side’s last two games in the league and his return sparked a sense of urgency as they beat the bottom-placed team by two goals to one.

Speaking after the victory, the Frenchman was first with the issue of Sergio Ramos who is expected to be out for at least seven weeks after undergoing knee surgery earlier in the day.

While the media are associating the injury to the player’s contractual situation, the Madrid boss dismissed that notion.

He said: “He had to do this because he was at the limit. I think the operation went well, that’s the most important thing. From tomorrow, he’ll start working to be back with us as soon as possible.”

Zinedine also expressed his satisfaction with the team’s performance after going behind: “It was very important to win today, given the recent difficulties. It’s a good win, three points. I think we showed character. We started slowly, but I think we then managed to come into the game and to play well. We needed this. Now we have to continue, step by step. We need to play with joy as Real Madrid should, but that’ll come little by little.”

Marco Asensio looks to have picked up form in recent games and Zidane took the opportunity to commend the player’s improvement. He added: “I’m happy and he is too. He had his very long injury and we’re happy with how he’s doing.”