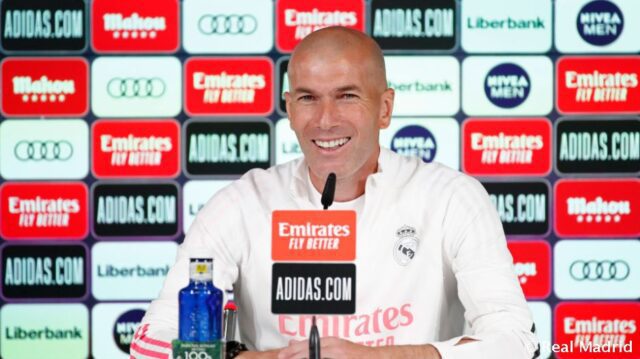 Real Madrid manager Zinedine Zidane has been speaking to the press ahead of the club’s final game of the season against Villarreal.

At his presser, the Frenchman was bombarded with questions about his future rather than the game against Unai Emery’s side but he chose not to delve into that topic.

The gaffer said: “We have a game tomorrow, that’s the important thing. Then we’ll see. There will be time to talk about the future. Now is not the moment. After 37 matches, do you think we should waste time about next year right now? One person isn’t important because it’s about the whole team.”

On the all-important game against Villarreal, Zidane added: “We know we are facing a good Villarreal side who do things very well. This season has been tough, but we are ready to give our all in this game.”

Eden Hazard is set to miss out in the final game of the season for Madrid after missing out on Friday’s group training. Discussing the Belgium international, Zidane said Hazard is only unavailable because of a minor issue that the club doesn’t want to take any risks over.