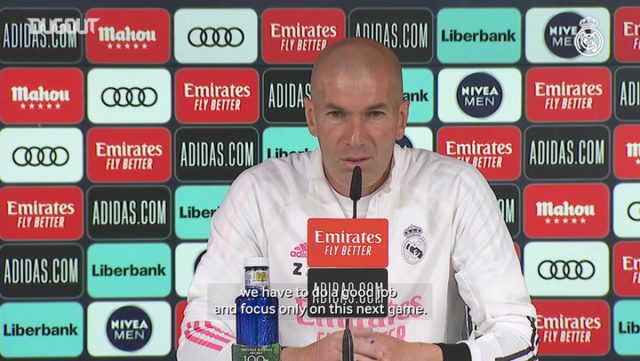 Real Madrid are set to host Osasuna in match-day 34 of the Spanish league season at the Alfredo Di Stefano Stadium.

Zinedine Zidane earlier on Friday faced the press to speak on a number of topical issues ahead of the game.

Here are excerpts from his press conference ahead of the game against Osasuna on Saturday night.

Zidane addressed the need for the concentration of the team to be on Saturday’s fixture rather than the UEFA Champions League semi-final second leg against Chelsea.

The coach said: “Before Wednesday, we first have to think about Saturday, Not everybody will be able to play. But, we’re going to put out the best team we can to win. We have to do things well tomorrow against Osasuna.”

Barcelona were on the receiving end of a 2-1 defeat against Granada on Thursday night, a result that has blown the La Liga title race wide open.

Asked about the defeat of the rivals, the Frenchman replied: “No, it doesn’t change anything. What happens elsewhere, we can’t control that. I don’t get happy because of the defeats of our rivals. We need to work hard and we know it’ll be difficult. There are seven matches to go [he is including the Champions League final] and we’ll compete to the end.”

Dani Carvajal’s injury means that the club have now suffered 55 different injuries this term, a worrying issue for the club. Discussing that topic, Zidane didn’t want to apportion blame to anyone.

He said: “It’s not easy to manage a squad like Real Madrid’s squad. Everyone has an opinion about this. It isn’t easy and we’ve had lots of difficulties. Whose fault is that? I don’t think there’s a need to find someone to blame. It has been a strange year in every sense. Preparation is fundamental for players and we haven’t had that this year. We’ve had more injuries than most, but to reach the end of the season in the good position we’re in… Ooft. This means I’m very happy with what the guys have been doing. When there’s problems, there are solutions.”