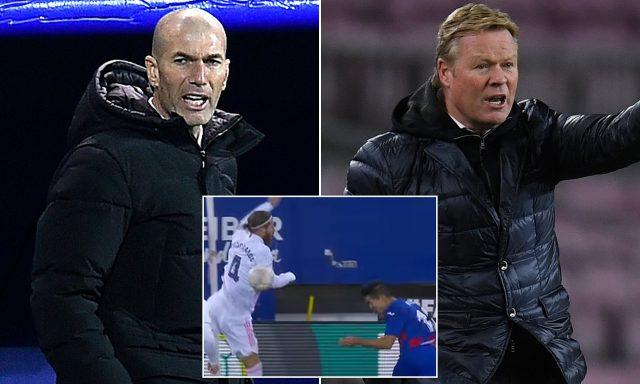 Real Madrid manager Zinedine Zidane has admitted that he was annoyed by comments by Barcelona coach Ronald Koeman regarding a certain decision of the referee in the victory over Eibar.

Madrid beat Jose Luis Mendiliber’s side by three goals to one. Prior to the referee waving away calls for a penalty following Sergio Ramos’ arm coming into contact with the ball in his penalty box, Eibar were just a goal behind Zidane’s men.

And the Blaugrana manager fumed at the decision of the centre referee not to award a spot-kick to the home team. He claimed, “nine out of 10 people would disagree with.”

Zidane was faced with questions from the statement of the Barca manager during his press conference on Tuesday, to which he replied: “It annoys me because I never get involved with the referees. They are part of the game and make good calls or bad ones – like the players, like everyone in life. They are only trying to do their job – a very difficult job.  What Koeman said I’m not going to get into that. We have an important game tomorrow [against Granada], a very demanding game, and that’s the only thing we’re thinking about.”

The gaffer went on to claim that his side do do not get favours from the referees as people have suggested, claiming that his side rather suffer from refereeing decisions. “It’s true that in every game we are unlucky with penalties, but I’m not too focused on that really,” Zidane added.  “The only thing we’re interested in is tomorrow’s game. That’s what interests us. It’s very important to us. We have to be focused. The most important thing for us is just to keep doing what we’re doing now. We’re in very good form and [will] try to win all three points tomorrow.”

Madrid play Granada on Wednesday night and the manager will hope that his side will continue their winning streak despite the absence of Luka Modrić.