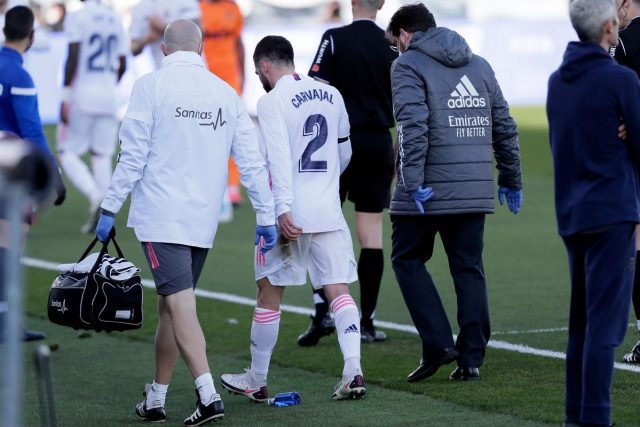 Real Madrid secured their third victory in their last three games on Sunday against Valencia at the Alfredo di Stefano Stadium.

Goals from Karim Benzema and Toni Kroos made sure the Los Blancos walked away with all three points with a 2-0 win.

The manager spoke to the press after the game, bemoaning the injury crisis at the club while also speaking of Dani Carvajal’s injury after just 25 minutes.

Zinedine Zidane said: “The worst thing for a coach is having injuries. I hope what Carvajal has suffered isn’t serious. I feel for him. He played well for the first 25 minutes and I’m annoyed that he is injured again because he is an important player for us. But, I don’t understand all these injuries. We’re suffering a lot of them and I’m concerned. I can’t explain it.”

Zidane also commended the defence on their improvement over the last three games, shielding Thibaut Courtois to the maximum. The Frenchman said: “There has been an improvement and the players believe in what they’re doing. There are still many points to be played for. There’s 45 remaining, so we’ll see what happens. We’re just going to focus on what we can control and won’t worry about everything else.”

Ferland Mendy’s involvement in Madrid’s attack looks to be on the rise, with the latest being a goal ruled out against Los Che. Zidane said: “I’m really happy for Mendy. He can contribute in attack and scored a great goal the other day and a great goal today, even if it was ruled out for the width of a foot. He’s doing well. He’s a player who can run up and down the wing all game.”