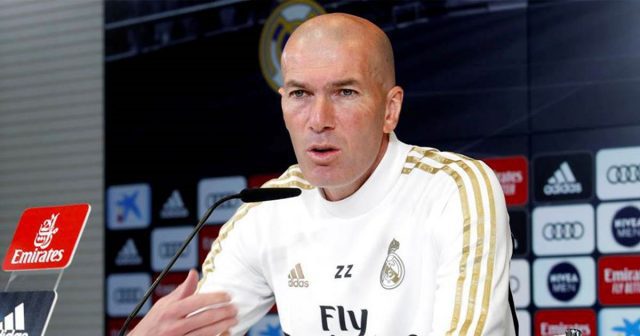 Atlético Madrid will host Real Madrid at the Wanda Metropolitano Stadium over the weekend, in what promises to be a crunching fixture in the chase for the Spanish La Liga title.

Madrid manager Zinedine Zidane spoke to the press ahead of the game to talk about the importance of the fixture for his side with regards to the title race.

He said: “We know it’s a special match. Madrid derbies always are. Derbies are always a nice match for players, which I know because I was a player. Our fans know this too and we are prepared for this match, after having a very good week of training. It’s another three points in play. It’s a final, but just like every match is a final. We always need to win whenever we play. No matter what happens tomorrow, we’ll be alive in the title race.”

Despite boasting of a good record over the Rojiblancos in recent years, the Frenchman refused to dwell on the past games, explaining: “I don’t think there’s a favourite. What has happened in past matches doesn’t affect the next derby. I don’t know what will happen in the match, but we know we have to play a good match against a strong opponent who are above us in the table. We want to start the match well and have a good match over 90 minutes.”

Zidane also turned down the opportunity to be drawn into the comparison between two strong goalkeepers, who will go head-to-head on Sunday to salvage points for their respective teams. When asked about who was the best between Thibaut Courtois and Jan Oblak he replied: “There are many good goalkeepers and everyone can decide who is the best in their view. But, we have Thibaut and he is one of the best. He has grown a lot with us and he is an important player for us. He has shown that recently and we’re happy that we have Thibaut in the team.”

The manager also edged his side to make productive use of the chances that come their way. He concluded: “We want to score more goals, but the important thing is to create chances. Recently, we’ve created a lot. Every player can improve of course. That’s what they’re doing, whether it’s Marcos [Asensio], Vinícius or Rodrygo. They all want to improve and improve their stats. I remember that I used to not score so much and it was an objective of mine when I was a player, to score more goals.”