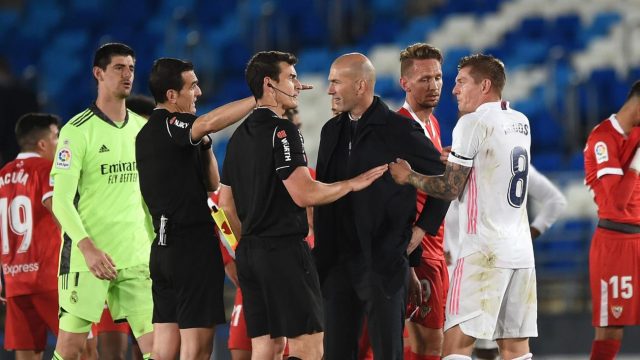 Real Madrid could only salvage a point against Sevilla on Sunday evening when they have presented the opportunity to go top of the league table.

The club felt they were hard undone by some referee decisions which saw the Los Blancos draw 2-2 with Julen Lopetegui’s side at the Alfredo Di Stefano.

Zinedine Zidane expressed his anger after the blow of the final whistle before venting his frustration at the post-match press conference.

Asked about his thoughts on the referee’s decision to award a penalty for a handball on Eder Militao, Zidane said: “I don’t understand [the handball criteria]. There was a Militão handball, but there was also a Sevilla handball. I wasn’t convinced by what the referee told me.

“But, he is the one who whistles. I never talk about this [refereeing controversies], but today I’m quite annoyed. They have to explain the handball rules to me. If there is a Militão handball then okay. But, there was also a Sevilla one. But, it is what it is.”

Zidane also pointed out that his squad didn’t have the best of starts against the Seville-based club but were better in the second 45 minutes.

He added: “I think we started slowly in the first 25 minutes, but the second half was very good. I think the players gave everything and deserved more. They deserved to win. But, we have to think about the next game. It’s not in our hands anymore, but we’re going to fight to the end.”

Madrid plays Granada in their next league game on Thursday.