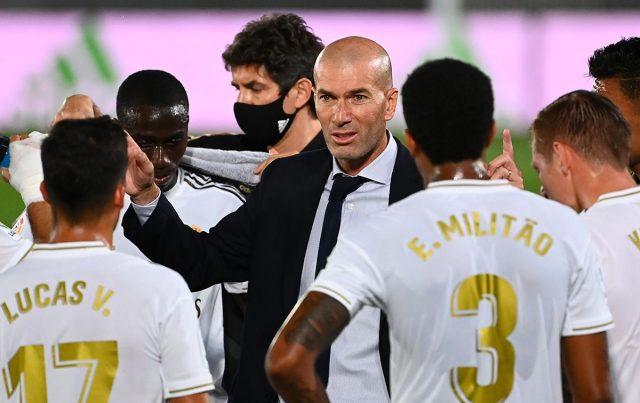 Real Madrid manager Zinedine Zidane has defended his players amid talks underrating their quality in the 2019/20 campaign.

The France coach is on the verge of leading his side to a third La Liga trophy in nine years with two wins away from the feat, but he has been faced with questions of how special his team have been in the season.

Los Blancos despite not scoring too many goals have managed to win all eight of their games since the top flight restarted after the three months hiatus, which has seen them concede just two goals in such run.

Within such period, second-placed Barcelona have also been unbeaten but draws picked up against Sevilla, Celta Vigo and Atletico Madrid have seen them trailing Madrid by a point, with the latter having played a game less.

But the success of Zidane’s team have been downplayed due to the merits they have had over the last few games, have been said to be inferior to previous Madrid sides.

“It doesn’t bother me or surprise me, it’s always the same debate,” Zidane told a news conference on Sunday. “We prove in every game and every training session that we are good. We have to show it. Everyone will give their opinion on what they think of Real Madrid because it is the most important club in history and this will never change.”

The Frenchman also claims his focus is on the game against Granada, despite games against an in form Villarreal and Leganes coming up within the week to round up their domestic season.

“La Liga and the Champions League are the goal and what we fight for, but it is useless if we look beyond tomorrow’s game. This is the last week and there are three games. It is the most difficult, but the most important. All the teams have things to play for and we want to put all our energy into tomorrow’s game.”

Zidane also rubbished suggestions that Madrid have had the better of refereeing decisions through the VAR over the last few weeks.

“Everyone can give their opinion, I don’t mess with the opinions of others,” he said, when asked about the VAR talk. “What we are doing is giving everything on the pitch and putting in a great effort every day. That is what I’m interested in.”