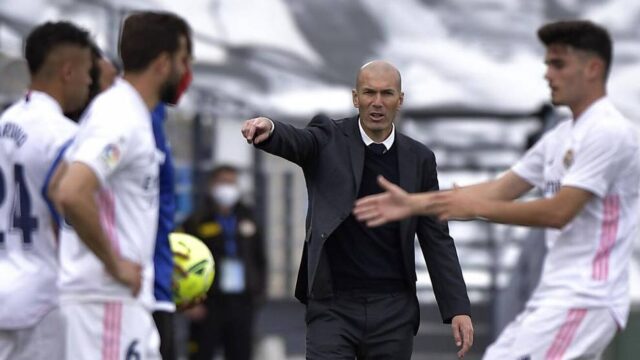 Real Madrid manager Zinedine Zidane was on press duties after his side’s 2-1 victory over Villarreal on the last day of the 2020/21 Spanish La Liga season.

Karim Benzema and Luka Modric both scored for the Los Blancos in a comeback win after Yeremi Pino had given the visitors a first-half lead. However, that result was not satisfactory enough to ensure Madrid retained the league title as Atletico Madrid walked away as champions.

Speaking after the game, the manager said: “I want to thank our fanbase because they have always supported the team. I think everyone can be proud of the fact that the players gave their all. We have to congratulate the whole squad. We also have to congratulate Atlético Madrid, who deserved it because whoever is top deserved it. The most important thing for us is what the players have done.”

While questions were asked about his future at the club, Zidane opted not to discuss that issue, saying: “With time and calm, I’ll speak with the club. We didn’t win anything, but we know what we have to do. As a club, we didn’t win anything this year. We know what we have to achieve, and what the fans want is the most important. We have to thank our fans because they have supported us the whole way. It’s a day to congratulate the whole squad.”

The Frenchman also highlighted that his main gave their all throughout the campaign despite not winning anything. He added: “We gave everything on the pitch and I’m responsible for all of this. We’ll evaluate everything. All the players want to do is win.”