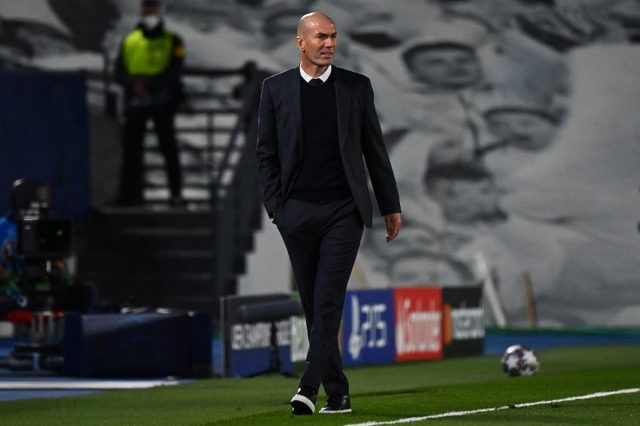 Speaking to the media following Real Madrid’s win over Liverpool at the Alfredo di Stefano Stadium, Zinedine Zidane revealed that it was a good win for his team while also adding that they are yet to secure qualification to the next round.

Madrid beat the current Premier League title holders by three goals to one with some of their key players including Sergio Ramos, Eden Hazard and Raphael Varane. The latter’s absence was due to him testing positive for coronavirus.

The manager claimed that his country man’s unavailability was never going to change his tactical approach to the game as he had already made up his mind.

He said: “We didn’t change anything, just changing Éder Militão for Raphael. The plan was to play 4-3-3 with Raphael. We knew there was something there [with the long passes forward] We know their full-backs are attacking, so with the quality, we have with Toni Kroos and Vinícius we scored a fantastic first goal.”

Zidane also gave credit to Vinicius Junior, whose name was twice on the scoresheet. The Brazilian has been in fine form in recent times and the manager praised him for his performance adding: “I’m happy because he needed to score, just like Marco Asensio or Karim Benzema need to score. He’s playing well. When a player scores one goal, he has extra energy.”

Real Madrid are up against Barcelona in their next league game over the weekend, an encounter that could play a role in determining the winner of the Spanish league but Zidane insisted that his player’s focus should only be about enjoying their latest success.

“We have to enjoy this game today, then look at it tomorrow,” Zidane added. “Although not even tomorrow. We’re calm. The game is on Saturday. We just need to recover well.”