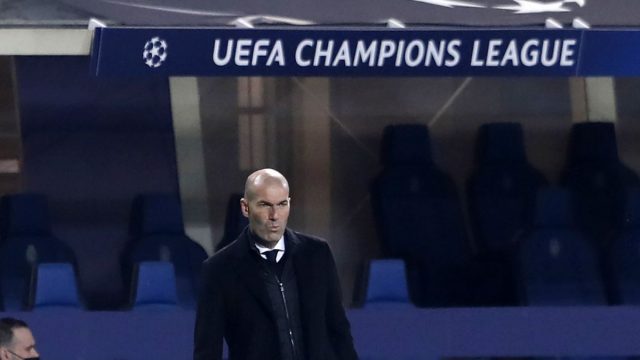 Having upped their game in the Spanish La Liga in the last five fixtures, Real Madrid toppled those performances up with a win over Atalanta on Wednesday in the UEFA Champions League.

Ferland Mendy was the surprised goal-scorer, with his goal coming four minutes away from the final whistle after striking the ball outside the penalty box.

And during his post-match conference, Zinedine Zidane took time to reflect on the performance of his team while also talking up the France international’s goal.

Zidane revealed that he was happier with the result than the performance. He said: “I don’t think we played a great game, but the important thing was the result. We still have the second leg to come. But, we’ve taken a good result against an Atalanta team that play well. We have an away goal and a clean sheet. The tie is still alive, though. We’ll have to play a good game in the second leg.”

On the deciding moment of the game, the gaffer said: “Yes, it was a pre-planned piece of play. But, the player who was supposed to shoot wasn’t Ferland! But well… he scored with his right foot. I think he actually sometimes manages to his it with more power with his right. He’s more accurate with his left, but maybe stronger with his right.”

While the team seemed to gain upper hand in the game after Remo Freuler was harshly sent off for a foul on Mendy in the 17th minute. Zidane claimed the sending off made things difficult for his side as they had to change their plans.

He added: “I don’t know if [the red card] was excessive. But, it’s the referee who makes the decision. The red card changed our plan a little, because it became a different kind of match. It was uncomfortable when they went down to 10 because we couldn’t find the spaces.”