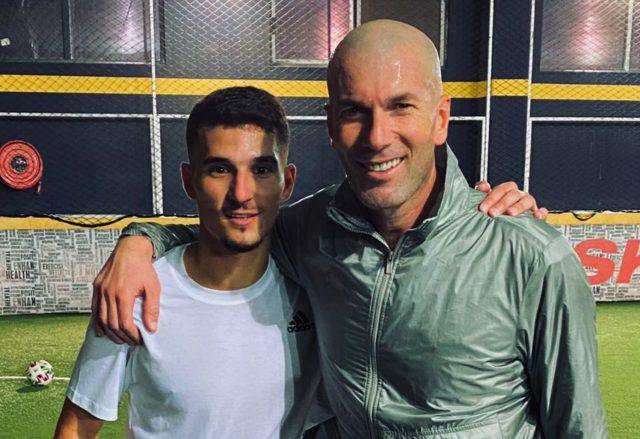 Ahead of the game against Levante, Real Madrid manager Zinedine Zidane was given the opportunity to speak to the press on Saturday morning.

The Frenchman spoke at length regarding his side’s preparation to the game while also taking time to respond to questions from the media.

Zidane was quizzed on the reported interest in Olympique Lyon midfielder Houssem Aouar who has been linked to the club recently.

Zidane dismissed the possibility of signing the midfielder this summer but admitted he is a player who could feature for the club in the future.

He said: “I don’t know what information you have. He is a great player, I know that. Maybe one day he can play for Real Madrid, but right now we have this squad and we’re going with this squad.”

Concerning the ongoing injury concerns to his squad, the manager calmed the situation, saying: “I’m not worried, but I don’t like this. It’s frustrating, but we’ll carry on with the rest of the players we have. I don’t like to look at negative things like injuries, but we have to accept this and we won’t make excuses. There is a lot of talent in my squad, but also a lot heart.”

Zidane also played that suggestions from the press that Eden Hazard could be heading the same path as Gareth Bale should his injuries persist.

“No, I’m positive and Hazard is too,” the Frenchman said. “It’s a muscular injury, the kind that comes from working so hard to return. But his injury is fine.”

Los Blancos lost to Levante the last time they visited at the Cuidad de Valencia and the Madrid boss is hopeful that he side will not come back with the same result as last season.

He said: “It was difficult last season, but we’ve prepared well. It’ll be difficult, but we’re prepared.”