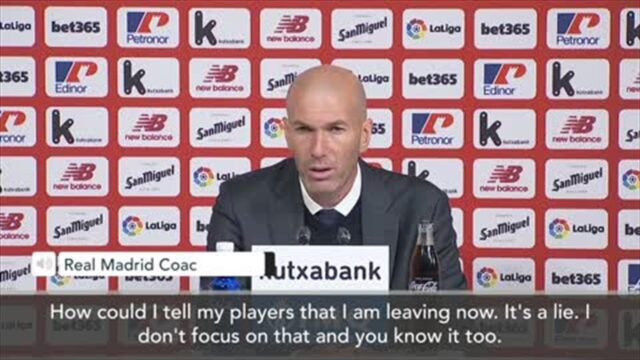 Real Madrid have all to play for on the last day of the 2020/21 Spanish La Liga season after Nacho Fernandez’s 68th-minute goal secured all three points for the Los Blancos on Sunday against Athletic Bilbao.

The win still leaves Madrid two points behind City rivals Atletico Madrid who came from behind to beat Osasuna at the Wanda Metropolitano.

Speaking after the all-important win, manager Zinedine Zidane said: “The win and three points from today are what’s important. We’ll fight to the end. We’re happy with this very very good match we played.”

Zidane, whose future at the club looks uncertain at the moment with media reports claiming the Frenchman looks set to leave the club and has already informed his players about his decision.

However, the gaffer dismissed such reports saying: “How could I tell my players at this moment that I’m leaving? No. It’s a lie. I’m focused on this season. We have one match left and that’s all that I care about. We’re fighting for a lot. Despite having a very difficult year, we’re in the fight. Let’s hope we can win this title in the final match. We’ll give our every last drop.”

On the performance and future of centre-back Nacho, Zidane added: “[That Nacho should stay at Real Madrid for the rest of his career] is clear. Very clear. He deserves to be here.”

Madrid plays Villarreal in their last game of the season knowing that a win and an Atletico slip up against Real Valladolid will all but confirm their triumph.

Without Ferland Mendy and Casemiro against PSG, do Real Madrid stand a chance?