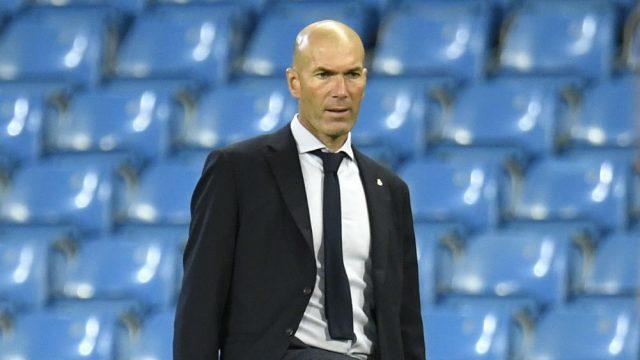 Zinedine Zidane was happy to see his team fight with everything until the very last minute in their win over Inter Milan on Tuesday.

Madrid recorded their first win of the Champions League campaign following their 3-2 win over the Italian side at the Alfredo Di Stefano Stadium.

Antonio Conte’s side fought from two goals behind to level things as at the 68th minute, but a brilliant piece of strike from Rodrygo Goes was all the Los Blancos needed to carry the day.

The results leave Madrid in a much better place compared with their position after the first two games – they now find themselves just a point behind Borussia Mönchengladbach who currently top the group and leveled on points with Shakhtar Donetsk.

“There’s always tension because you’re up against a very good team,” Zidane said after the Inter victory. “We suffered, but we have to congratulate the players because they deserved [the win].

“We started very well, pressing high as we like to do, and we did it quite well. Then we went 2-0 up, but we conceded very quickly and we found it difficult to keep going with our football. Then the second half was very even.”

For the third time in a row in the competition, Zidane’s substitutions paid off as Vinicius Junior and Rodrygo, who replaced Eden Hazard and Marco Asensio respctively combined to give Madrid the victory.

“Hazard and Asensio did a good job too and, with the changes, we found space that our opponent was leaving in behind and they were very good.”We have to be happy. We can always do things better, but we have to enjoy the win because it’s always difficult against great teams and we have to believe until the end. I’m going home very happy.”

Madrid will now turn their attentions to the next game over the weekend against Valencia in the Spanish La Liga before club activities are put on hold next week.