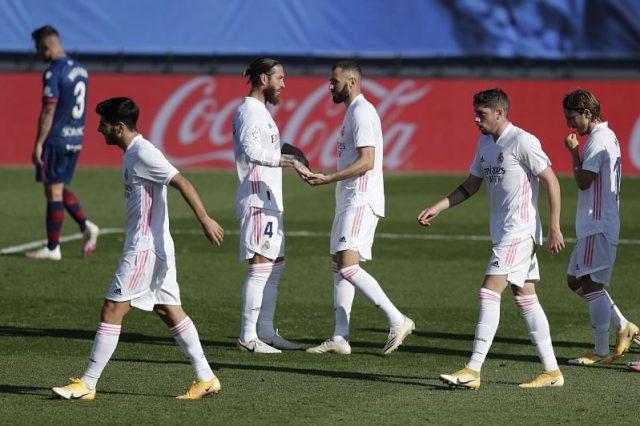 SD Huesca lost their third game of the 2020/21 La Liga season when they visited the Alfredo Di Stefano Stadium to play Real Madrid on Saturday.

The away side were beaten convincingly by Zinedine Zidane’s side who looked to have built moment following their back to back losses Cadiz and Shakhtar Donetsk in the league and Champions League respectively.

After those results, Madrid have found their rhythm and have beat Barcelona while also managing a draw against Borussia Mönchengladbach.

Unlucky not to have kept a clean sheet on Saturday, the Belgium international was very good on an individual level. He made some vital stops to deny the away side from getting into the game.

The Spain international last just 52 minutes on the pitch after picking up a knock in the second half. He was also the one provided the assist for the second goal of the day by Karim Benzema.

Had a quiet night throughout the game due to Huesca’s inability to break into the defence of Madrid. He however looked leggy in the closing stages of the game.

Sergio Ramos proved essential at the back once again for Madrid but the captain could have done a lot better to stop David Ferreiro’s consolation goal.

Marcelo Oliveira’s stamina in the last years has been questionable and it was the same outcome on Saturday, though he did quite well going forward.

The midfielder was very instrumental in the middle of the park for the Los Blancos, winning the ball at some advantageous points. He also added a goal to cap off another impressive performance.

Just a regular performance from the Brazil international who didn’t have much to do before subbed off in the 68th minute.

Huesca’s tactics meant that Modric was barely involved in the game as Madrid failed to play through the middle of the park. He last the whole 90 minutes.

Marco Asensio is still a long way off getting to his best. The winger lost possession three times and could only complete one of his four attempted crosses.

Despite a quiet first 45 minutes, the forward found the back of the net on the stroke of half time and also added a second just before the game came to an end.

Back to the pitch and doing what Eden Hazard loves doing – playing football. The Madrid No.7 opened the scoring with a stunning long range strike with his weak foot and played quite on Saturday.

Adjusted very well to a very unfamiliar position and looked dangerous going down the flank.

Provided the assist for Benzema’s second goal and looked lively after replacing Asensio in the second half.

Vinicius Junior during his 30 minutes cameo completed the most dribbles on the pitch – more than any player on the park during that time.

Played just 21 minutes of the encounter and completed all his 28 attempted passes, helping his side to hold possession.