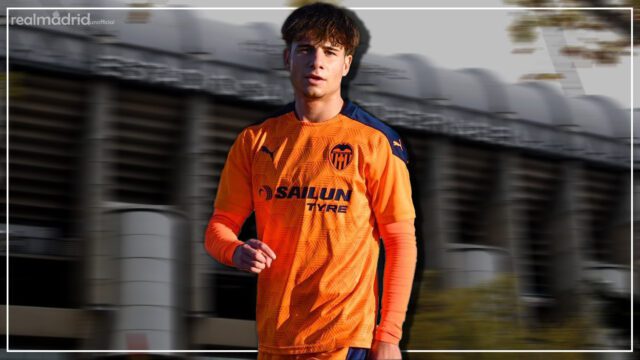 La Liga champions Real Madrid are said to be on the verge of signing 19-year-old Spanish attacking sensation Andres Garcia on a free transfer this summer.

Garcia, a very promising striker will be bringing an end to his time at Valencia following his unwillingness to commit to a new deal at the Mestalla after the expiration of his contract.

According to transfer guru, Fabrizio Romano, the deal between Garcia and Madrid is all signed and sealed with an official announcement the only missing part.

Real Madrid are set to sign young, talented striker Andrés García on a free transfer from Valencia for their Academy. The deal has been signed and completed. ⚪️ #RealMadrid

First called by @SalvaGomis97 – it’s done. Contract will be valid until June 2025. pic.twitter.com/AIsMqYPFLA

Andres Garcia has trained with Valencia CF for the past five years and has spent most of his formative years in the Valencian Community. The young prodigy, a striker by trade, has recently established a strong reputation in age-group football.

His growth over the course of the years made it less surprising when interest around him grew after deciding to leave Valencia. However, the player is said to have narrowed his choice to one team – the European champions, Real Madrid.

What will best suit Andres Garcia?

Madrid’s academy has got lots of potential and talents coming through and even though there are no uncertainties as to where Garcia will have the most period, Castilla has been named.

At age 19, Real Madrid might not want to risk his development and throw him under the bus which has been for some players that have been at the club for some time.

Sergio Arribas, Antonio Blanco, and a host of others have all been unable to move up the ladder and are still hopeful of making the necessary step.

A few years with Raul’s side could seem him develop into a top player, who is ready to challenge for a spot in the first team.

With a long season ahead, Garcia could really make a good case for himself along the campaign with the club bent on not bringing in a proven forward this summer.

Why the chase for Garcia?

Madrid have let go of Borja Mayoral for good with the player joining Getafe.

That leaves Ancelotti with Karim Benzema and Mariano Diaz as the only natural strikers and with the latter not convincing enough, Garcia has been identified as a long-term target.

He may not be the missing piece to the jigsaw now but should he join the club and impress with the junior side, Garcia could be in the first team sooner rather than later.

Mariano Diaz is linked with a move away from the club but his agent has dismissed talks with any other club.