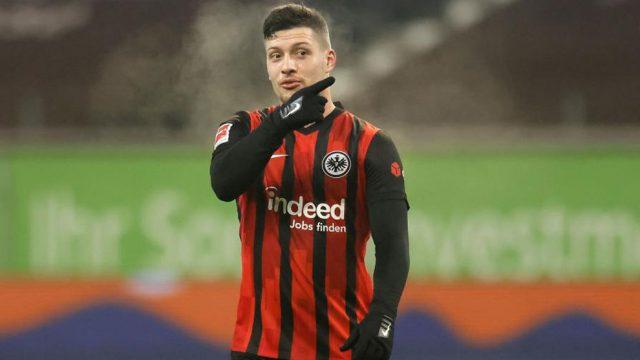 Luka Jovic looks to have picked up from where he left off in Germany before leaving Eintracht Frankfurt for Real Madrid in the summer of 2019.

Jovic rejoined the Bundesliga side in the winter transfer window and has become an instant influence on the team.

He has found the back of the net on three different occasions in the league in four games, already surpassing the total number of goals he scored for the Spanish side in 32 games.

Prior to his departure from Frankfurt, Jovic played a huge part in the club reaching the semi-final stage of the 2018/19 UEFA Europa League campaign, but he has been criticised for his failure to channel the same energy at the Santiago Bernabeu.

The loan move back to Germany is to get the Serbia international to enjoying regular playing time as he is expected to return to Spain in the summer. However, his long term future with Zinedine Zidane’s team has been thrown into doubt after his latest comments.

During his unveiling as a Frankfurt player on Friday, the 23-year-old told reporters in a press conference, “I am very happy to have returned. I am very comfortable and you can see that on the field of play. I scored two goals throughout my time at Real Madrid and now there are already three here. The city, the club and especially the team are made for me.

“In Madrid, there was a lot of bad luck. The injuries impacted me and I struggled to adapt.

“It was fortunate to have been able to train alongside the best players in the world. I have gained experience and I consider myself a better player now than before (joining Madrid). Despite not having been able to have regular games on the pitch, I take a lot of positive things from Madrid.

“It is never easy in a team like Real Madrid, where the style is different and the pressure is always very high. That is why it was best to take the step of leaving to return here.

“I don’t want to look to the future. I am focused on Eintracht and on being able to get back to 100 percent to play the 90 minutes. I do not have to prove anything to anyone. I know I am a good player and whoever sees me will appreciate that.

“My Spanish? I am not taking any more Spanish classes. I started to learn the language in Madrid, but now I am no longer learning it.”

His comments may come as a surprise to many, but with the Spanish press, they feel Jovic’s loan to Frankfurt is just to get him to rediscover his form and command a higher fee in the summer transfer window.