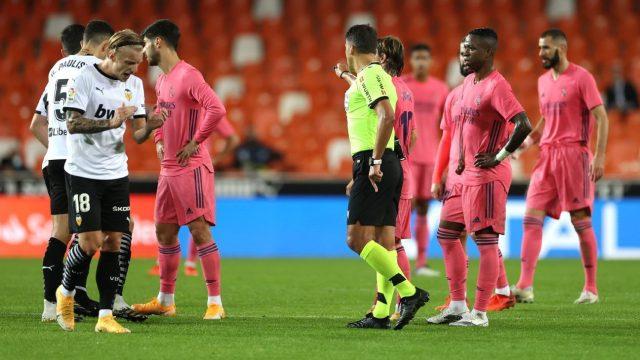 It wasn’t the best of results Real Madrid were hoping for when they traveled to the Mestalla Stadium on Sunday evening to play Valencia.

Madrid were without the services of Casemiro and Eden Hazard over the weekend as a result of both players testing positive for coronavirus.

The Los Blancos suffered a humiliating 4-1 defeat in the hands of Javi Gracia’s side and go into the international break with plenty of defensive mistakes to ponder over.

Here is how the players fared in the disappointing game against Los Che on Sunday:

The goalkeeper’s quest for another clean sheet continues and he was unable to save any of Carlos Soler’s three goals from the spot on Sunday.

The Spain international gave away the penalty which started the comeback for the home side. He look poor today throughout the game.

Varane, who replaced Eder Militao in the line up was victim in Valencia’s second goal on the night. The Frenchman continues to underperform and it’s a matter of time until he is benched.

Ramos was far from his best against a tricky Valencia forward line and the captain conceded a handball which resulted in the host’s fourth goal.

The only timed the Brazilian looked lively was during the first 25 minutes which saw him assist Benzema for Madrid’s goal. He also committed the foul for Valencia second penalty on the night.

The Uruguay international had a decent game on the night playing in the defensive midfield role. Linked up well with Luka Modric in the middle of the park.

Modric played with urgency throughout the game, one of the few Benzcdcndkcndkcndkcndk

The Spain international’s presence was rarely seen in the game and it surprises how e was left on the pitch for almost the whole game.

Marco Asensio is still yet to carry the team when needed the most. He looks far from his best form for the club.

The forward came off after 76 minutes played despite his opener in the first half. He rarely affected the outcome of the game.

To think that Vinicius gets to play ahead of Rodrygo Goes is quite sickening. The youngster is a long way off become a real threat for Madrid.

Didn’t do much to change the scoreline after coming on but his return is huge boost for the manager.

He made two key passes during his 26 minutes on the pitch but the game had already been lost.

The German also couldn’t get the needed influence on the game.

The only positive thing from his substitution was seeing him make his first appearance of the season.