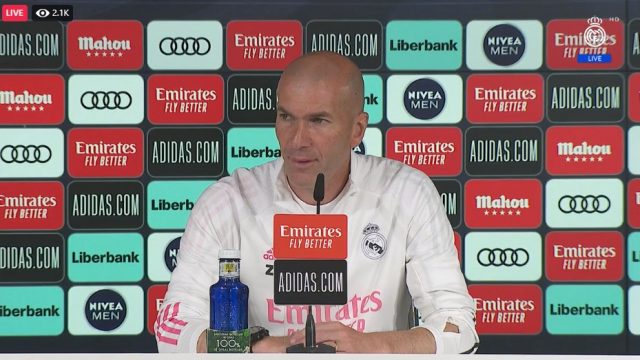 Real Madrid will come up against Sevilla at the Alfredo Di Stefano Stadium on Sunday looking to return to the top of the La Liga table.

A win could see Madrid topple Atletico Madrid to the first position following the latter’s 0-0 draw with Barcelona at Camp Nou earlier on Saturday.

Zinedine Zidane faced the press on Saturday ahead of the game discussed some of the issues facing his team including the importance of the game, Eden Hazard’s situation as well as injury concerns.

Speaking about the Sevilla game, Zidane said: “We have four matches remaining and they are four finals. We need to forget about the Champions League and just think about tomorrow. Sevilla are a team that will compete. They’ve shown from the start until now that they’re a good team and they’re fighting to win the title too.”

On Hazard, the forward was seen on screen laughing with his former teammates at Chelsea following Madrid’s elimination from the UEFA Champions League on Wednesday night.

A move which has since forced the Belgium international to issue an apology for his behavior. On that, Zidane said: “Hazard has apologised. He didn’t mean to offend anybody and he explained this in his apology. He is going to help us going forward. Until now, we haven’t been able to see the player he is, but we hope we’ll see that version of Hazard soon. He is a Real Madrid player and will compete for Real Madrid. He has a contract here.”

Zidane also dismissed the notion that Sergio Ramos was rushed into the team for the game against Chelsea. The club’s captain together with Ferland has picked up new injuries ruling them out of the game against Sevilla.

Addressing the situation, the gaffer said: “Ramos was 100 percent when he played the other day. The important thing is that he recovers soon. We’ve had many injuries and that is a concern. This year, players haven’t been able to rest. I hope next year will be different in that sense.”