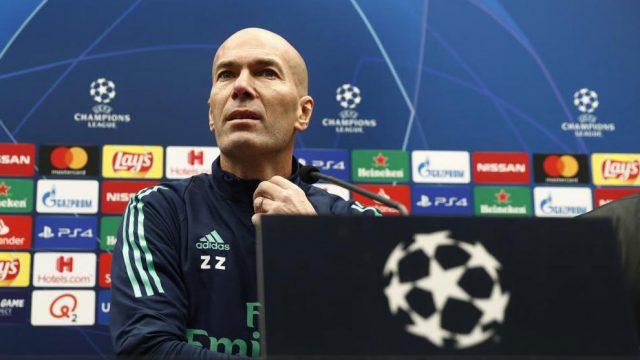 Real Madrid are up for one of their most important games of their UEFA Champions League campaign on Tuesday.

Madrid host Inter Milan in what could be one of four finals left to be played in the group stages of the 2020/21 Champions League campaign.

Manager Zinedine Zidane was given the chance to have his traditional press conference before the game on Monday, and the Frenchman took time to talk about the game and the opponents as well as some other matters in the team.

He said: “We know that this is a difficult match because we’re playing a very good and physical team that can play good football. It’s our next match and it’s a final. We’re going to try to take the three points. There’s a final here every day. Every thing we do is a final. Every match we have is a final. We know that and we’re going to focus on what we have to do tomorrow. Whether it’s a friendly, a training match or whatever, we always want to show that we’re good. We always aspire to win the Champions League. It’ll be difficult, but we’ll fight for it.”

The gaffer was also asked if he thinks his managerial job at the club could be on the line should his side lose to Inter tomorrow and Zidane said he is not thinking about his future at the moment.

He replied: “I don’t think about that. I think about tomorrow’s game, where we’re lucky to be able to play a Champions League match. All we can do is prepare the match and give our all.”

For the first time in a long while, Zidane will have the trio Karim Benzema, Marco Asensio and Eden Hazard all fit and available and the manager was asked if he feels the three forwards could reach a certain heights just as the famous ‘BBC’ did some years back.
The boss said: “The players here want to make history and want more. I think these players are important. I’m sure they’re going to achieve important things. Training with my players every day, what my players want is to compete, play and win. That’s really good for the coach, which right now is me. I enjoy being with them and we’re going to try to achieve our objectives with all our players, not just those three.”

Considering how Luka Modric has been used so far this campaign, his playing time came up during the presser and Zidane was questioned. He added: “Nothing has changed with him. We know how important he is. There are many matches and we’re counting on all our players. Every time he plays he does well. For a coach, picking players is the most difficult thing. Especially with a player like Luka, who’ll play sometimes and who won’t play sometimes.”

Zidane was also asked about his relationship with former club mate and Inter boss Antonio Conte and he said to that: “I’m not in regular contact with him, but we played together and he was my captain. It doesn’t surprise me that he became a coach. The relationship is good, even if we don’t talk regularly. I remember when I was preparing to become a coach, I went to Juventus and was talking with him and that was fantastic. The relationship is very good.”